Sandi Metz gave an excellent talk about unit testing back in 2013. In it, she talked about what to test, what not to test, and how to assert outcomes so that we can write as few tests as possible while being thorough and keeping our tests fast and stable. 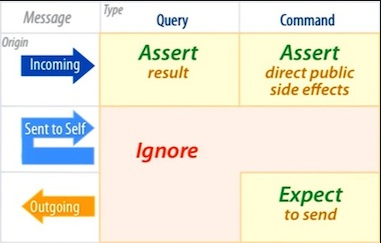 Sandi’s minimalist unit testing guide breaks down messages by their origin – whether they’re incoming to the object under test, outgoing from it, or sent to itself – and by whether the messages are commands or queries:

Sandi’s talk uses Ruby, so she talked about method calls, which we should think of as messages in object-oriented languages. But surprisingly (or unsurprisingly), the talk is highly applicable to testing LiveView. After all, as a process, LiveView receives and sends messages.

Sandi’s guide shows that we should assert the result of an incoming query. In LiveView, we can send a query message to get the LiveView’s current rendered state:

Since LiveView is a process that renders a UI, we tend to interact with the process via the UI. In our test, calling render(view) will send the query message to render the UI. So, we assert some truth about the result.

The function render_click/1 sends a command message to perform the click action on the “Show notes” link. You can imagine our link having a phx-click attribute attached to it and our LiveView having a handle_event("show-notes", _, socket) callback.

Our action has a direct public side effect – showing the notes – and following Sandi’s guide, we assert that those notes are now visible.

Since LiveView is a process, it can send a message to itself: send(self(), :message). So how do we test those messages? As Sandi states, we shouldn’t test those messages directly because they happen inside the black box. We should only test LiveView through incoming public messages.

But there is one exception where I consider breaking the black box encapsulation: when a LiveView re-renders itself based on a timer. Consider the case when a LiveView is polling a different process or a database every 10 minutes. Should our test wait 10 minutes to assert that the UI has changed? That seems impractical.

Instead, we can mock the timer, inject a fake timer, or we can have our test act as the timer by sending the message:

The test does not cover the scheduling of the timer, so that logic remains untested. Whether or not that’s enough for you depends on your level of confidence on this test and the cost of using an alternative testing strategy.

If LiveView makes an outgoing query to another process (or even another collaborator module), Sandi’s guide tells us that we should not explicitly test that. From our test’s perspective, that is happening inside the black box. And the other process should test its own incoming query. We only care about the overall result of our LiveView’s query.

For example, if our LiveView process calls another process or module to fetch the user’s data on mount/3, we shouldn’t test that we’re making that message call or function call. We should only assert the result of having that user in our LiveView:

Outgoing commands are those messages that have side effects in the world. If our LiveView is directly responsible for sending such a message, we should test that it is sent.

In her talk, Sandi suggests we test outgoing commands with mocks. That is certainly possible in LiveView, but setting up Mox (or something equivalent) for testing LiveView can be cumbersome.

A nice alternative is to make our test process a mock recipient. That is easy if the broadcasting happens via Phoenix.PubSub:

We subscribe our test process to the topic, perform our command, and then assert the message was sent by checking that our test received it.

If you liked this post, I’m covering more on testing LiveView effectively in my online course. It’s not ready yet, but you can sign up on that page to hear when it goes live. Happy testing!