May 16, 2022
I really like how closely Ecto integrates with our database. That was a surprising difference when I first came from Rails. Ecto’s constraints are a great example of that. Like Rails, Ecto has validations. But unlike Rails, Ecto also has constraints. Validating uniqueness is the example that most easily comes to my mind.

April 29, 2022
In a previous post, I wrote about how we can test a named singleton process in our system. There's one more improvement we can make for better cleanup.

April 22, 2022
I was reading the paper Mock Roles, not Objects, and there's a description of TDD that captures an important concept I haven't been able to put into words before: TDD changes code design from invention to discovery.

April 04, 2022
A reader recently asked me about mocking external dependencies in Elixir. So, I wanted to discuss two popular mocking libraries and how to mock without a library (and which option I like best).

March 09, 2022
When developers onboard new projects, we are uniquely positioned to help improve the onboarding experience for future developers. So, when I join a new project, I relish the opportunity to clarify and simplify setup instructions.

March 04, 2022
elixir lunch is now elixir social. I renamed it because very few people brought lunch 😅. It seems most weren't interested in that part. But they were interested in hanging out with other Elixirists. So, I figured I'd roll with the punches.

February 21, 2022
Named singleton processes are wonderful for Elixir applications, but they often make it hard to test their behavior. Since singletons are started as part of the supervision tree, they become a globally shared resource for our tests. And that can lead to intermittently failing tests due to race conditions.

February 07, 2022
I've been thinking of starting something called "elixir lunch" for some time – a low-key lunch gathering of Elixirists. Now, let's make it happen.

January 24, 2022
I'm excited about LiveView's JS commands (introduced in 0.17.0) because they allow us to express JavaScript within our LiveView code. And that makes it easier to create certain types of interactions.

January 17, 2022
Behavior-driven development (BDD) has a powerful by-product – building just what we need to support our customers. Nothing more.

New to Elixir? Beware of Date and DateTime Comparisons!

January 10, 2022
People new to Elixir, especially those coming from Ruby, might be surprised at how Elixir dates and datetimes are compared. It's easy to introduce a subtle yet dangerous bug.

Lateral Joins Instead of Window Functions

December 16, 2021
If you need to use window functions, try a lateral join first! It's Postgres's equivalent of a `for_each` function.

What is Elixir? For my Ruby friends.

December 08, 2021
Many Ruby friends think of Elixir as just a functional Ruby. So they see it, maybe try it, and walk away. But that's just the surface. Beneath the surface, Elixir brings a runtime system that we can design and control to build applications that heal themselves.

November 07, 2021
I want to see how to handle 7 GUI tasks in LiveView. Here are the highlights from implementing the fifth task: a CRUD application.

Project-wide find and replace in Vim

October 08, 2021
A recipe to find and replace across a project in Vim.

September 25, 2021
Testing web pages often requires targeting elements with CSS selectors. But which CSS selectors should we use? Are some better than others? I think so.

July 23, 2021
I want to see how to handle 7 GUI tasks in LiveView. Here are the highlights from implementing the fourth task: an interactive timer.

July 02, 2021
I want to see how to handle 7 GUI tasks in LiveView. Here are the highlights from implementing the third task: a flight booker.

I'm going on a consulting adventure!

June 24, 2021
After years of working with thoughtbot, I've decided to go on a solo consulting adventure.

May 07, 2021
I want to see how to handle 7 GUI tasks in LiveView. Here are the highlights from implementing the second task: a temperature converter.

7 GUIs: Implementing a Counter in LiveView

April 30, 2021
I want to see how to handle the 7 GUI tasks in LiveView. So here are the highlights from implementing the first task: a counter.

April 16, 2021
One of the concepts I found most interesting about Shape Up is the concept of appetite. Like a deadline, appetite talks about the amount of time we're going to spend on a feature or project. But the process is wonderfully reversed.

April 10, 2021
Want to change a regular view to a LiveView, but you don't want to change all those path helpers? I got you covered.

Culture is a 50-day moving average

February 15, 2021
In a recent interview, Jason Fried said that culture is a 50-day moving average of our actions. That is incredibly freeing and compelling.

December 21, 2020
It's tempting to write `LiveViewTest` assertions that specify too much of our HTML. But that couples our tests to the implementation specifics. There's a better way: the `has_element?/3` helper can help us be specific without adding coupling.

November 27, 2020
Let's apply Sandi Metz's minimalist unit testing guide to LiveView. There are so many parallels and our tests benefit from Sandi's wisdom.

November 01, 2020
An update on progress and changes to TDD Phoenix since August.

October 30, 2020
This year I presented a Testing LiveView talk at ElixirConf 2020. The video and my slides are now online.

October 16, 2020
Our communication practices can be very disrupting. Remote work has taught me to be more considerate of how I communicate with others. We should treat other people's time as we like ours to be treated.

Pay the cost up front. Don't distribute it to others.

October 02, 2020
Our communication practices can be very disrupting. Remote work has taught me to be more considerate of how I communicate with others. We should treat other people's time as we like ours to be treated.

September 23, 2020
Most people learn vim's `normal`, `insert`, and `visual` modes. But they're only casually acquainted with vim's powerful Ex commands. Let's take a look at some.

August 11, 2020
I've been writing a TDD Phoenix book. It's still a work in progress, but it's freely available online. This is a short update on progress and plans.

April 21, 2020
Vim has a reputation for being hard to quit. But it turns out there are so many ways to get out of it — it's like vim wants you to quit. Let's look at a few.

Remote Tools and Tips in These Remote Times

March 17, 2020
Some tools and tips for remote collaboration from my experience being remote over the last two years.

Breaking Out of Ecto Schemas

February 07, 2020
My workflow usually involves squashing many commits into a single one. But sometimes, the workflow calls for the opposite action -- splitting a single commit into many. This is how I do it.

December 31, 2019
Having your code reviewed can be daunting. But it can also be very helpful. As reviewers, we can make the difference. Here are five tips to make your code reviews more helpful to the author.

November 28, 2019
When faking external services in tests, start with something simple. I like having a public interface to adapters and having an in-memory adapter for tests. Let me show you an example.

Supercharge Your Elixir and Phoenix Navigation with vim-projectionist

November 18, 2019
Toggle between alternate files, edit files by type, and create files with templates — all with `vim-projectionist`. If you've never used it, you're in for a treat.

November 11, 2019
Many people ask, "How do I find time to refactor?" I think the question itself betrays a misunderstanding of refactoring. Let me tell you when I refactor.

November 06, 2019
Don't let your git repo become a graveyard of stale branches. But how do you even know what branches are there? Let me introduce you to `git branches`.

October 31, 2019
Refactoring has a specific meaning. When we misuse the word, we lose the ability to communicate an important concept. Let's revisit what refactoring is and what it is not.

July 26, 2019
Sum types are a powerful domain modeling technique. Let’s look at how to use them to remove invalid states.

Back to basics: psql

March 14, 2019
The right tool for the right job, right? Well let me introduce you to psql.

Say no to more process, say yes to trust

March 01, 2019
Adding policies is easy. Removing them is difficult. Say no to more process. Trust your team instead.

A couple of Elixir videos on Upcase

Recently, thoughtbot decided to make Upcase free. It has a lot of great learning materials, especially when it comes to Rails, vim, test-driven development, and tmux.

Do you break your Elixir eggs on the big end or the little end?

December 25, 2018
From big-endian to little-endian through unsigned integers. A tale of two ends, and Elixir shines again.

Don't forget the silent step when you squash and merge

December 24, 2018
GitHub’s squash and merge button is great. But make sure to write a good commit message before you confirm those changes.

Is Elixir a scripting language?

October 15, 2018
Elixir is known for being a language made for building distributed applications that scale, are massively concurrent, and have self-healing properties. But is Elixir good enough for the mundane scripts of this world?

June 18, 2018
Long-lived processes are everywhere in Elixir. Let’s look at why they’re needed and how to create them!

Build your own web framework in Elixir (video) 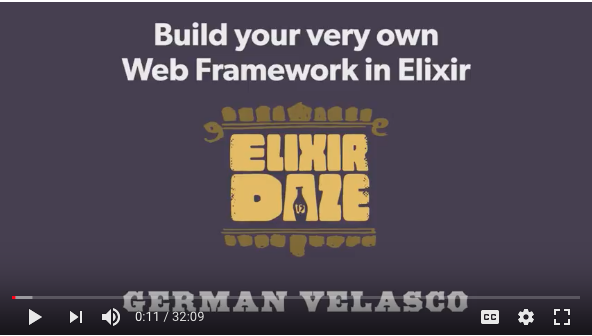 How to organize your functional code

March 19, 2018
When coming from object-oriented languages, I often hear people ask the question, “How do I organize my code? Modules are just bags of functions!”. That is a question I asked myself as well, but after using Elixir and Elm for a while, I have noticed that there is a principle of organization that I keep using and that I see in the wild. I like to think of it as the principle of attraction.

An introduction to concurrency in Elixir

Concurrency is a first-class citizen in the Elixir platform. The concurrency model is that of isolated, independent processes that share no memory and communicate via asynchronous message passing. In other words, a process can run concurrently without concern of others, and processes communicate with each other only via send-and-forget messages.

Tests as Counselors of Design

One of the benefits of tests is that they are the first piece of code that will interact with our application. As such, they can offer valuable insights into the application's complexity.

Supervision trees are awesome. For a while I was a bit confused as to how to use the simple_one_for_one supervision strategy. Let’s look at it step by step by creating a simple bank account from which we can deposit and withdraw money.

When working on a feature, I often find pieces of code that I have not seen before. In order to better understand the class or method, I like to use tests as documentation and as a way to explore the code's functionality.