Write commit messages with the future in mind

Write with the future in mind, and you’ll also write better messages for the present. 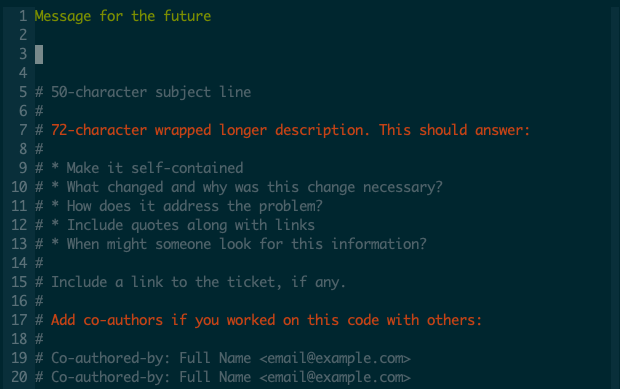 Include all relevant information in the commit itself. Don’t rely on external systems.

It’s good to include a link to the relevant ticket for Pivotal, Trello, Jira, etc. But don’t stop there. Future developers may not have access to your team’s issue tracker. I’ve seen teams change issue trackers and lose all of their commits’ context because they only linked to the ticket. Instead, include the context in the commit itself – you can even copy the information from the issue tracker and paste it into the commit message.

Linking to other commits (not Pull Requests – commit SHAs). Developers can always git show SHA to get the related commit’s context.

Don’t just say what you did. Always include why you did it.

Most people only mention what they changed. And though it’s helpful, it’s also the least important part – we can deduce that from the code changes. But the why is usually lost across time.

And if you went on a journey to solve the problem, describe how you arrived at the solution and how it solves the problem. It might be obvious to you now, but it won’t be to those reading the commit in the future.

Write quotes for those links

If a change in documentation can lose the context you’re linking to, copy the crucial context in a quote:

Remember, we want our commit to be a time capsule – capturing all the necessary information at a point in time.

Write to be discovered

Ask yourself when and why someone might need your commit in the future.

Don’t think only about describing the changes for your team with all their present context. Instead, think of someone in the future searching for information:

Write so your commit can be found.